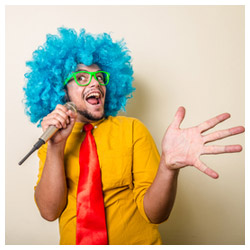 Jokes that are so bad they are actually really good...


See also:Dad Jokes and Best Puns What goes tttthhh?
-
A snake with a lisp Do you know what were my grandpa’s last words before he kicked the bucket?

How far do you think I can kick this bucket here? Why are bananas curved?
-
To fit into the skin, which is curved. What did the hammer say to the thumb?
-
Nice to meet you. A drummer and a bass player jump off a skyscraper – Boom Boom. My bicycle’s gone.
-
Did you have a chain on it?
-
Yes
-
Well, then the chain is gone too. Man to a butcher: "I'd like bull's testicles."

Butcher: "So would I." I was looking for some books on paranoia in the library. When I asked, the librarian said very quietly, “Yes. They are behind you.” Cliffhanger endings are incredibly frustrating. They just What’s black, red, black, red, black, red?
-
A zebra with a sun burn. At the doctor's office:
Doctor, “Hello Mr. Crinkey, how are you?”
-
Patient, “I’m fine, thank you.”
-
Doctor, “Well what the heck are you doing here?! Next!” “How old are you again?”

The incredible Sulk. Why does it suck to be a penguin?

Because even when you get angry, you still look cute. What has four legs, one foot and one head?
-
A bed. What do you get when you cross-breed a skunk and a vegetable?
-
A smellery.At work:

Excuse me, may I disturb you shortly?
-
Of course, what is it?
-
Nothing, I just wanted to disturb you. Where do we get virgin wool from?

Ugly sheep. What is white and sits on your TV?

Andy has diabetes now. Online question:
What's the best way to solve my money problems?
-
Answer:
Wrap yourself in a blanket and lay yourself on the porch of a millionaire family. It has four legs and it can fly, what is it?
-
Two birds. Paul: I have good news and bad news. Which do you want to hear first?

Paul: The good news is that I have no bad news. What do you call a deer with no eye?
No idea.

What do you call a deer with no eyes and no legs?
Still no idea. Whenever I’m sad I just read my blood donor ID. It always says “B
positive”. What did the cowboy say to the cow that stood on the barn roof?
-
Get down, cow! Daddy, where is Albania?"
-
"You have to ask Grandma. She cleaned here the last time."  One twin to the other: "You are ugly." What is transparent and smells like worms?
-
A bird's fart :-) What is the tallest piece of furniture?
-

The bookcase. It’s got the most stories. Why is soccer so dangerous?
-
Because of the constant shootings.
Last words of a highly poisonous snake?

"Drat, I bit myself on the tongue!" One friend to another:

Why are you giving me an apricot?
-
I heard there’s no way you can get a date. Why do cows wear bells?

Their horns don’t work. A crying son runs to his mom: “Mom, mom, (sniff), Grandpa slapped me in the face.”
-
Grandpa approaches: “Stop lying or I’ll do it again!” Helium walks into a bar and orders water. Bartender apologizes, "Sorry sir but we're currently out of water." What does Helium do? It doesn't react. A woman starts chatting to a man on a subway: "Hello my name is Margaret."
-
The man replies: "Mine not."  What do you get when you cross a dog and an antenna?
-
A Golden Receiver. Why are eggs not very much into jokes? Because they could crack up.  It’s always scary when a computer turns into a zombie. It has many mega-bites. How do you tell a doctor is bad?

He doesn’t have a lot of patience. Q: What do lawyers usually wear when they go to court?
-
A: Lawsuits! When do you stop at green and go full speed at red?
-
When you're enjoying a watermelon! What would happen if you threw blue sneakers into the Red Sea?
-
They would get wet. I never knew eggs were good for the eyes, but my cousin claims they gave him eggcelent vision. How can you open a banana?
-
With a monkey! Why does a woodpecker have a beak?

So as not to smash his head against the tree. What would you call a very funny mountain?
-
Hill Arious" Question: What is green and has big, sturdy wheels?
-
Answer: The grass. The wheels were a lie. I was devastated to hear that Peter died. Are you coming to his funeral?
–
And why should I? He’s not coming to mine, either. Why do we consider chickens as friendly animals?
-
Because they lay their eggs instead of throwing them. What tea can vary in taste from bitter to sweet?
-
Realitea. My wife told me I'm crazy. That’s just stupid! I don't even have a wife. You’ll never believe whom I saw yesterday!

Everybody I laid my eyes on! Two grains of sand go through the desert. One to the other: "I have the feeling somebody is watching me." Oh, they were laughing when I told them I’m becoming a stand-up comedian. Well, ha! They’re not laughing now! Two undies meet, one says to the other, "Hey, have you been on holiday? You got so nice and brown!" Why do birds fly to warmer climates for the winter?
-
It’s much easier for them than walking! What would Bears become without Bees?
-
Just ears. Two tomatoes walk across the street. One of them screams: "Careful there's a truck comi...SPLASH!!!!" If I were to choose between dating and eating a soup – I think I’d rather eat the soup. Not much point in dating it. What is yellow and smells of bananas?

Ape vomit. A horse goes into a bar.
-
Barkeeper: "Why such a long face?" “In our traditional farm hotel, you are woken by the call of the cockerel!”
–
“Very good, please tell him 9 o’clock.” Why is the butt divided vertically and not horizontally? It would keep clapping if you ran down the stairs. Ok, now stop imagining it. On the scale of 1 to 10, how quickly can you get excited?
-
First of all, isn’t this scale awesome?! At the movies: “Sorry we’re all sold out down to the last place.”
“Excellent, I’ll have the last place then.”
What is a cannibal’s natural first choice in a restaurant?

The waiter. Why did the picture have to go to prison?
-
It was framed. A guy orders at a bakery, "I'd like 19 buns please."

The baker suggests, "I think you should take 20, sir."

The baker replies, "That way, you would have one more!" What is yellow and black and flies?
-
A group of mustard seeds in leather jackets!
When a tampon and a sanitary pad are competing at the races, which of them is going to win?

The pad! The tampon keeps tripping on the string. What is the difference between a soccer star and a bank robber?
-
The bank robber goes, “Give me the money or I shoot!”

The soccer star goes, “Give me the money or I don’t shoot!” I saw you with a new guy. Is it something serious?
-
No, we do laugh from time to time. What is black and white and waits on the washing line?
-
A fly in a wedding dress. Dad to his son: "I have nothing against us sharing an opinion, as long as it means that I keep my opinion and you share mine." My teacher said I should walk a mile in his shoes so I’d know how hard it is to be a teacher. Now I‘m a mile away and I still don’t have any idea what he’s talking about. What is the difference between an eggplant and a chicken?

They're both purple, except for the chicken. Two cows sit in the basement, chopping up oil.

A screwdriver goes in through the door, goes up the wall, crosses the ceiling, heads back down the other wall and goes out through the second door.

One cow looks at the other and says, "This is insane, did you see that?" "Yeah, totally insane, he never greets." What happens when a snowman gets angry?

He’ll be having a meltdown until he’s down to earth again. What do you call an alligator that’s wearing a vest?

Women are from Venus.

Cows are from the Moooooooooon. The last 4 letters in the word "queue" are silent. Can they be waiting their turn? A guy files for a divorce. Only two days after he hears that his wife’s father died and left her a huge heritage worth a million dollars.

He calls his wife and says: “Honey, I’m pregnant!” Job Interviewer, “Why are you wearing jogging pants?”
-
Man, “This is customary dress code where I come from.”
-
“Where do you come from?”
-
“From home.” Accepting all those cookies on websites is extra hard when you’re diabetic. Isn’t it funny that when boats get sick, they actually go to the doc(k)? The nurse is registering a new patient, “When is your birthday?”

The nurse asks, “What year?”

The patient shrugs, “Every year!”