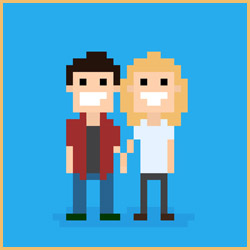 Terrorism strikes no fear in my heart. I’ve been married for years. I got all sentimental when I saw my husband looking at our marriage certificate for half an hour.

Then I found out he’s been looking for an expiry date.

My son wanted to know what it's like to be married. I told him to leave me alone and when he did I asked him why he was ignoring me. I received an invitation for a wedding. I answered: Maybe next time. Thanks. It’s been raining for days now and my husband seems very depressed by it.

He keeps standing by the window, staring. If it continues, I’m going to have to let him in. I don’t really mind sleeping on the couch. It’s like living my childhood fantasies about the Wild West – including the angry mama bear nearby. My wife and I have been married for quite a few years and my wife asked me recently to get some pills that would make sure I’d be up to some action in the bedroom again.

I brought home diet pills. Apparently very much not what she meant. A golden rule of the wife:

There isn’t a problem in the world that couldn’t be created. My wife’s cooking is so bad we usually pray after our food. My wife told me she needs more space. I said no problem and locked her out of
the house. Why don’t women propose?
-
Because when they kneel down, men get all the wrong ideas.
What to give a man who’s got everything?

A woman. She’ll tell him how everything works. I tried to re-marry my ex-wife.
-
But she figured out I was only after my money. Two women chat:

Does your fiancé have a stutter?
-
Yes, but no worries. Once we’re married, I’ll be the one doing the talking. I got a call telling me my wife’s been taken to the hospital.

“What the heck is she complaining about again?!”
Marriage is an institution of three rings. Engagement ring, wedding ring and suffering. “Darling, can I go out in this dress?”

“Yes dear, it’s already dark out.” – We had a terrible row with my wife last night. But she crawled to me on her knees in the end.

– Wow – that’s really impressive! What did she say?!

– Come out from under that sofa, you filthy coward! American scientists have finally found out what a woman wants.

Unfortunately, she changed her mind since then. A little boy looks at his mum at a wedding and says, “Mummy, why is the girl dressed all in white?”

His mum answers, “The girls is called a bride and she is in white because she’s very happy and this is the happiest day of her life.”

The boy nods and then says, “OK, and why is the boy all in black?”
– It’s our anniversary, dear. How do you suggest we celebrate it?

– With a minute of silence? Honey, do you think I gained weight?
-
No, I think the living room got smaller. Honey, what will you give me for our 25th anniversary?
-
A trip to Thailand?
-
Wow, that’s awesome, and for our 50th anniversary?
-
Then I pick you up again. I got really angry with my car navigation today. I even yelled at it to go to hell. 20 minutes later, it brought me in front of my mother-in-law’s house. A man and his wife have to go to a doctor. The doctor asks, “Do you share the same blood group?”

The husband replies, “We must by now. She’s been sucking my blood for years.”


What's the difference between a bachelor and a married man?

Bachelor comes home, checks out what's in the fridge & goes to bed.

Married man comes home, checks out what's in the bed & goes to the fridge.   "If I’d known you were this poor, I’d never have married you."
-
"Don’t pretend I didn’t warn you! How many times did I tell you that you’re everything I have?" A guy loses his job, all his money has gone, all hope is lost and he’s walking miserably towards the dole line, wondering if there’s anybody who could help him. Suddenly there’s thunder and lightning and a scary, blood-covered demon appears in front of him.

He walks over to the man and in a rasping voice whispers in his ear, “I have heard your pleas. I’m ready to give you a million bucks. But you have to agree to give me your wife.”

“OK,” says the guy, “now where’s the catch?” Woman to her husband while at it: "Please say dirty things to me!"

Because if there were more, it would be hell instead. My new wife left me because of my huge insecurity problems.

Oh no, hang on, she’s back. She just went to the bathroom! A wife complains to her husband: “Just look at that couple down the road, Roger, how lovely they are. He keeps holding her hand, kissing her, holding the door for her … Why can’t you do the same?”

“Are you mad? I barely know the woman!” “I cuddle with my husband about two or three times a week.”

“Oh, but wait, I thought you were single.”

“Ah I see. I thought we were talking about your husband.” If it's true that girls will probably marry men who resemble their fathers, it would explain why so many mothers cry at weddings. She: "Honey, I don't like you with the new glasses on."

He: "But sweetheart, I don't wear any glasses."

She: "True, but I do." Mommy, why are all the cars beeping their horns?

Because there’s a wedding going on.

But isn’t the horn a warning signal, Mommy?

Exactly, son. Husband: “Soon we will be married for 10 years. I will get you a nice new car for our anniversary.”
-
Wife: “Oh darling. Nothing would please me more!”

And so the husband got her nothing for the anniversary. My husband and I had very happy twenty years. After that we met. My wife said she’d leave me unless I stop playing constantly with the walkie-talkie, over. “I’ve had it with your silly remarks about my weight. I’m leaving you!”

“But honey, what about our child?”

“Oh, so you’re not pregnant?” Wife to husband: “Honey, guess who’s not wearing any panties and bra today?”

Husband, “Ah, that’s why your face looks so stretched today!” Childhood is when you go to the toilet in the night and then you run back and jump in your bed, glad that the monster under the bed didn’t get you.

Adulthood is when the monster lies in the bed next to you. And here’s another lesson in good manners: Throwing the bouquet behind you to see who’s next?

Really poor taste at funerals. Optimist. A man who leaves the engine running when his wife says she’s “just going to run inside the shop to grab a bottle of milk.” How did you like your lunch today, darling?”

“Oh you just have to look for reasons to fight, don’t you?!” Why does a rooster crow so early in the morning?

He wants to get a word in before all the hens wake up. Wife: “You know what? I refuse to talk about this anymore!”

Wife 10 second later: “And you know what else?” I haven’t spoken a word to my wife in years. She hates to be interrupted.“ At a medical check-up:

Do you do dangerous sports?

Well, sometimes I talk back at my wife. “Hey George, what would you give to have my wife?”

“Deal! She’s yours!” If mothers-in-law would be inherently in harmony with their sons-in-law, perhaps mankind wouldn’t have spread to all the far reaches of the Globe? She: “All my friends are telling me I married an idiot!”

He: “What they mean is, only an idiot would’ve married you!” My wife and I often exchange opinions.

I come with my own and leave with hers. Arguing with the wife is a lot like trying to read the Terms of Use on the internet. In the end you just give up and go “I Agree”. I’ve never been married, but I can imagine how it feels. I once had a stone stuck in my shoe for 10 hours. Next Part
Husband and Wife Jokes