Yo Mama Jokes
(for academic purposes only)

by Katerina Janik
* A small note: It's not ok to use any of our jokes to make actual people feel bad.
Your mother is so ugly, your father takes her with him to work so he wouldn't have to kiss her goodbye. 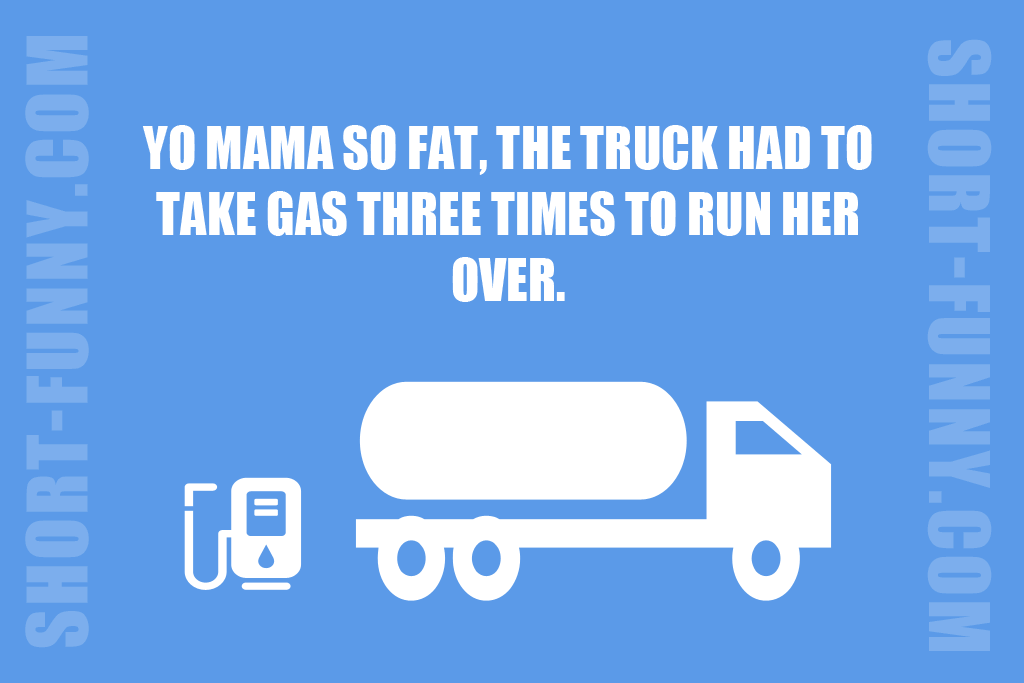 Yo mama so fat, the truck had to take gas three times to run her over.Your mom is so ugly, the FBI is using her as a flash grenade. Yo mama is so fat she falls from both sides of the bed. Yo mama so fat, when she showers, it takes the water 3 minutes to finally hit the floor. Your mom works in prison as punishment. Your mom yells from the toilet: "Hey everyone, I’m a 3D printer.” Your mom is so ugly, people break into her house just to close the curtains. When yo mama steps on the scale, it says "Only one person at a time please“.

Your mother barks when someone is at the door. Yo momma's so ugly she once threw a boomerang and it refused to come back to her. Yo mama so hairy, she keeps getting stuck on the escalator. Yo mama's so fat she sank a rowing machine last week. Yo momma's so fat, I made a picture of her last Easter and it’s still printing. Your mother has to peep when she goes backwards. Yo mama's so fat, last time she went for a swim in the ocean, some Japanese boat tried to harpoon her. Yo mama so old, her passport states her birth date as “Jurassic Period”. Your mama's so fat that if she tried to bungee jump, she’d go straight to hell! Your mother is so ugly, when she looks in the mirror, the mirror gasps, "Whoa, no, I quit!" Yo mama has legs like a gazelle. Maybe not as thin but definitely that hairy.
When your mother looks out of the window, Satan starts vomiting. I met your mom yesterday, she seemed like a very nice guy.Yes, I did spit your mother in the face but that was only because her mustache was on fire.Your mother's so fat, Moby Dick looks like a Tic Tac next to her. Your moms butt hair is so long she always has to fight being pulled into the toilet when she flushes. A bus crashed into your mom. Your mom turned around and yelled: “Hey, which one of y’all threw the stone?” Yo mamma looks so terrible, she went into a haunted house on a dare and came out with a new job. Yo mamma is so fat – when she gets into a lift it only goes down. Yo mama is so fat when she leaves the house in high heels, she comes home in flip-flops. Yo mama is the strongest one in prison. Yo mama received an official ban on jumping. NASA calculated there’s too much of a risk she’d be taking us out of orbit. Yo mama is so fat she has to put a “Detour” sign around her neck when she goes out for a walk. Chuck Norris is afraid of your mother. When your mother lies on her stomach, she gets vertigo! We don't need a wall.

We can just put up a line of posters of your mom.Yo mama steals your pocket money.Your dad drives your mama to work with a forklift. Yo mama so fat, she works as an outdoor cinema screen.When your mom farts, even the skunks outside have problems breathing.Yo Mama has more chins than a Chinese phone book!They banned your mother from Walmart. Your mama's so fat and old, she was the reason Dracula vanished – she gave him diabetes.
When yo mama says, “Hey, I’m only a human,” the scales from the bathroom yells, “Two and a half human!” When I see yo mama, I feel pretty again. Yo mama so fat, the selfie stick just ain’t long enough for her. Bob the Builder once saw your mum, he said, "No, we can't fix this." Yo mama's so ugly that even the family dog refuses to lick her face. Yo mama's so fat she had to be baptized in Sea World. Your mom is so fat she darkens our classroom every time she comes to pick you up from school. Yo mama so fat that when she got run over by a truck, she was totally fine, but the truck got stuck in her belly button. How do you get your momma in the house?
-
You grease the door frames and throw a biscuit inside. When your mother goes swimming, all kids are screaming, "Who's going to get to the island first! Your mom has to comb her back. Yo momma's so fat and old that when God said, "Let there be light," he had to ask her to move out of the way.Yo mama's name is Joe and she's the hairiest in the zoo.Your mother is so fat she looks at the menu in a restaurant and simply says, "OK." Yo mama so fat, she needs two SD cards when she wants to save a selfie. Your mom’s butt hair is so long it regularly gets stuck in her zipper. Yo mama's armpits are so hairy she looks like she has two hippies in a headlock. Yo mama's so fat when she steps on the scale, it goes: "We don't do livestock".Yo mama is so fat when she died, she broke the stairway to heaven and had to go to hell. Your mom’s so fat, she’s round even in Minecraft.Until your mom was born, whales had no natural enemies.You know why yo mama has such a flat head in the back?
-
Because the toilet cover keeps falling on her head when she’s drinking. Yo mama's so fat she's on both sides of your family! Yo mama is so hideous, she once went to a hair salon and told the hairdresser to cut her hair - and then she opened her blouse! The zoo called. They want your mother back. Yo mama so big, she was born between the 13th and 17th December. When your mom farts, the volcano says impressed: Holy Smokes!! Your mama is so old her birth certificate is made out in Roman numerals. If somebody were to light up one of your mom’s farts, that would be the end of all life on Earth. Yo mama works for Weight Watchers as the "Before" picture.  Yo mama so fat she uses a boomerang to get her belt on. Your mom sings pirate songs on the toilet. When yo momma goes to the zoo, she throws feces at the apes. Your mom is so fat, when she falls down in Wyoming, a bike falls down in China. Yo mama so fat, when she falls on her back, she’s still the same height as before. Yo mama's so fat, Ebola wouldn't know where to start. Your mom buys the All You Can Eat Menu twice. Yo mama so ugly, when she sits down on a sandy beach, cats try to bury her. Yo mama so fat – she puts on a gray T-shirt and people mistake her for the Death Star. Even yo mama's tapeworms have diabetes.Yo mama is so poor that ducks throw bread at her! Yo mama is twice the man you’ll ever be.When your mother farts in the cinema, she gets a private viewing. Yo Mama so poor, she runs after the garbage truck with a shopping list. Does your dad have this really long, bushy beard?
(No)
Oh, then I saw your mom at the shops yesterday. Your mother collects ugly children.Your mam's so fat that when the world goes down, people can still live on her. Why can't your mother die?
-
She is so fat, Death can't get to her. Every time your dog farts in the car, yo mama rolls up the windows. Your mum's so fat, she sits next to everybody in the cinema!
Hunting with yo mama is dead easy. Whatever animal sees her gets paralyzed on the spot. Yo momma so fat, when she walks past a television, you miss all three parts of the Lord of the Rings. If your mom hadn’t jumped in the pool, NASA wouldn't have found water on Mars. Yo mamma so fat she shakes down the prices just by walking through WalMart.Your mom is so ugly she can stop a mob. 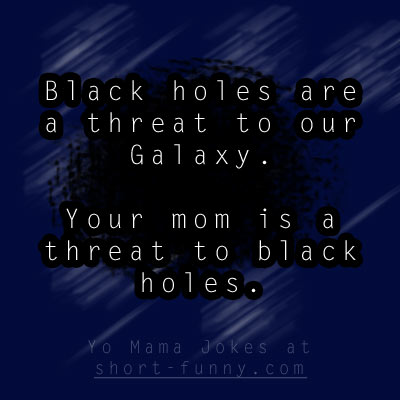 Yo mama is so old and ugly that when the Lord said, “Let there be light”, he immediately followed it with “Holy mackerel, wtf is that!”Yo mama is so fat that when her doctor diagnosed her with a flesh eating disease, he gave her five years to live.Yo mama so mean, she uses yo mama jokes on orphans.Yo mama went on a diet the other week. Everybody was happy and the world hunger was over.Yo mama was really fat. I mean, before she was buried, the earth was still flat! It hasn’t been fully established yet whether your mother lives on Earth, or whether the Earth lives on your mother.Yo momma’s back hair so thick, she ruined your neighbor’s rake the other day trying to comb it. Your mom is so overweight she once boarded a train and the train couldn’t start rolling. When yo mama goes to McDonald’s, all the other customers are asked to leave.


UP to the top of the page