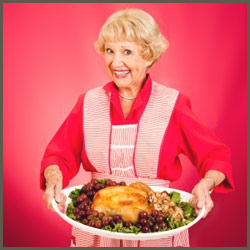 Two cannibals are enjoying a Thanksgiving dinner and a light conversation about all things family.

“I just can’t stand my mother-in-law,” sighs one.

“That’s quite understandable,” nods the other one, “why don’t you just have the potatoes with the gravy?”

What’s the universal key to a lovely Thanksgiving?

There’s always something to be thankful for on Thanksgiving.

Even if it’s just not being a turkey. 5.

Once upon a time, there was a very happy, long-married couple who ran a small farm.

They loved each other and all, there was just one problem – the guy farted incredibly, and enjoyed ripping seriously loud ones in bed especially.

The wife complained for years, pleaded – in vain. “One day, you’ll spill your guts out, you mark my words!” was the lady’s frequent closing warning.

Then one Thanksgiving morning, gutting the turkey, she had a stroke of genius. She took all the turkey’s guts and went to their bedroom and quietly slipped them under the still sleeping man’s covers. “That’ll teach him!” she thought with satisfaction and went back to her work.

At 10 the man was still nowhere to be seen – quite shocking for a farmer – and she was starting to worry when finally her husband came down – walking a little strange, wearing an even stranger expression.

“You were right about the farting, Ida,” he panted, “I’m ashamed to admit that I did fart my guts out. But with the help of our Lord and these two fingers, all is right again!” 6.

What does a disappointed mama turkey tell her kids?

If your father were to see you now, he would be turning over in his gravy!

Why did the policeman stop you on your way home last Thanksgiving?

Because you far exceeded your feed limit. 8.

What key can’t open doors no matter how hard you try?

What do turkeys and women have in common?

A lot of guys are only interested in their breasts. 10.

How many chefs does it take to stuff a Thanksgiving turkey?

Only one and even then it’s a pretty tight squeeze. 11.

About two weeks into November, the head turkey turns to his second-in-command and says, “I have a feeling something’s going down. The farmer just unfriended me on Facebook.” 12.

What do you get when you crossbreed a turkey with a harp?

What did the turkey say before he was roasted?

If the Pilgrims were still alive today, what would they be celebrated for the most?

What is a good name for post-Thanksgiving constipation?

What do you get when you cross an octopus with a turkey?

Finally enough drumsticks for everybody at Thanksgiving. Provided you can catch the darned critter. 18.

Why didn’t the turkey bake properly on Thanksgiving?

What do you call a turkey whizzing through the air past your head because the oven exploded?

The native Indians were laughing at the Pilgrims for being so pale and never getting a proper tan.

What smells the best at dinner on Thanksgiving?

What is the easiest recipe for a pumpkin pie?

Simply divide the pumpkin’s circumference by its diameter. 23.

“I celebrated Thanksgiving in an old-fashioned way. I invited everyone in my neighborhood to my house, we had an enormous feast, and then I killed them and took their land.” Jon Stewart 24.

“Thanksgiving is a magical time of year when families across the country join together to raise America’s obesity statistics.” Stephen Colbert 25.

What usually comes at the end of Thanksgiving?

Should you have that annoying distant auntie for Thanksgiving dinner?

It’s really not worth it. Just have the turkey. 27.

“The turkey is dilated to 3.5 inches, stuffing is crowning, time to eat everybody!”

That’s what happens at Thanksgiving when your mom is an obstetrician. 28.

Why did the turkey cross the road before Thanksgiving?

He was trying to give people the impression that he was a chicken. 29.

What happens when you seriously overstuff yourself with turkey at Thanksgiving?

You have a few slices of pumpkin pie. 30.

A Pilgrim blushing because he’d seen the turkey dressing. 31.

What did the pilgrim do when he bit into a bad piece of corn?

How did the Pilgrims die?

It was the Pilgrim Reaper. 33.

Somebody had eaten the drumsticks. 34.

What would mothers most like to make on Thanksgiving dinner?

You think you’re crazy about Thanksgiving?

You’ve got nothing on the turkeys. When Thanksgiving approaches, they literally lose their heads! 36.

Can you tell the difference between a female and a male turkey?

The male is the one with the TV remote.

Over the long journey and having overcome many hardships together, the Pilgrims’ bonds strengthened and they all became pretty good Palgrims. 38.

What can never ever be eaten for Thanksgiving dinner?

What happened the first time one of the settlers tried to write favor instead of favour?

He was attacked by a Pilgrammar nazi. 40.

What’s the link between turkeys and teddies?

What’s the best way to deal with a turkey?

How many turkeys does it take to screw in a lightbulb?

What do jazzy people put on their potatoes at Thanksgiving?

What did the little corn say to momcorn?

When will popcorn come? 45.

On Thanksgiving dinner, most of us turn into hipsters.

We all go out of our way to eat the turkey before it is cool. 46.

“I love Thanksgiving turkey … it’s the only time in Los Angeles that you see natural breasts.”

What happens when you’re too harsh on the cranberries and make them sad?

They turn into blueberries. 48.

Tamara the feeding frenzy starts all over again, yay! 50.

What’s the easiest way to catch a turkey?

Ask a friend to toss one at you.
BONUS THANKSGIVING JOKES

Why isn’t it a good idea to do bad things (e.g. pick your nose when you think no-one’s looking) at Thanksgiving table?

Because the potatoes are keeping their eyes peeled. I had to do something about my addiction to Thanksgiving leftovers.

Cold turkey was the only way to do it. What is the best Thanksgiving cookie?

One baked with May-flour. “Thanksgiving, when the Indians said, ‘Well, this has been fun, but we know you have a long voyage back to England.’” – Jay Leno “Last Thanksgiving I shot my own turkey. It was fun. That shot gun going, "Blam! Blam!"

Everybody at the supermarket just staring. Why track them when I know where they are?” – Kenny Rogerson Turkey fun facts:

- Turkey quite possibly didn’t feature on the first Thanksgiving menu. The records point more towards a duck or a goose.

- Turkeys can get a heart attack. This was discovered when the US Air Force were testing breaking the sound barrier and the huge boom ended up with a field of turkeys dead from fright.
- Black Friday is the busiest day of the year for plumbers. Guess why.
- Benjamin Franklin wanted turkey to become US national animal. He thought the eagle had a “bad moral character”.

- Because of the very harsh conditions during that first year of 1621, many historians believe that only 5 Pilgrim women (out of the 50 Pilgrims in total) were present at the Thanksgiving feast

– that’s probably how many have survived.

- After a stroll on the Moon, the first meal Neil Armstrong and Buzz Aldrin enjoyed was roast turkey (in a foil packet, but still).

What did the turkey say to the lady who visited the farmer in November?

“I heard Target is having a special chicken sale!” What did the turkey say in the sauna?

“Hmmm, what is that lovely smell?!”
What do you call a turkey that’s got no feathers?

Thanksgiving dinner.
What is the theory of relativity?

Take Thanksgiving for example. The turkey gets stuffed, you get stuffed, but you’re relatively better off. How do you make the richest soup ever?

Cook it with 24 carrots (carats).
What are turkeys thankful for at Thanksgiving?

The current veganism/vegetarianism fad.
How Do You Know You Went Too Far This Thanksgiving:

- You have grease stains on your butt – but you never sat down.

- Your post-dinner moans brought Dr. Kevorkian’s van to your door.

- You kind of suspect the amount of potatoes you used might have started a brand new potato famine, this time in Idaho.

- You ask your wife if you have the Jaws of Life at home when you need to get off the couch.

- You went for a blood test the week after and the only thing the nurse could draw from your arm was slightly darker gravy.

- The steering wheel is starting to get uncomfortably personal.

- The dog eyes you with new respect.

- While you were taking a nap after food, somebody quietly put a large plastic sheet under you, and a few dozen sandbags around you.
(Geek joke)
What do you call somebody who’s absolutely into Thanksgiving turkey?

A tryptophanatic. Yo mama so fat, you invite her over for Thanksgiving dinner and tell her you’re eating a whole turkey, and she brings her passport.
Geek section: “Turkey: A large bird whose flesh, when eaten on certain religious anniversaries has the peculiar property of attesting piety and gratitude.” – Ambrose Bierce
“Thanksgiving is the day men start getting in shape … to play Santa Claus.” – Melanie White
“Thanksgiving is a time to count your blessings, one by one, as each relative goes home.” – Melanie White