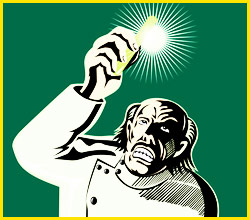 
Chemists are crap as assault soldiers. They don’t have the element of surprise. The real problem is not to create a perfect universal solvent, but to find something you could keep it in. Did you hear that oxygen and magnesium went on a date? I mean… OMG! 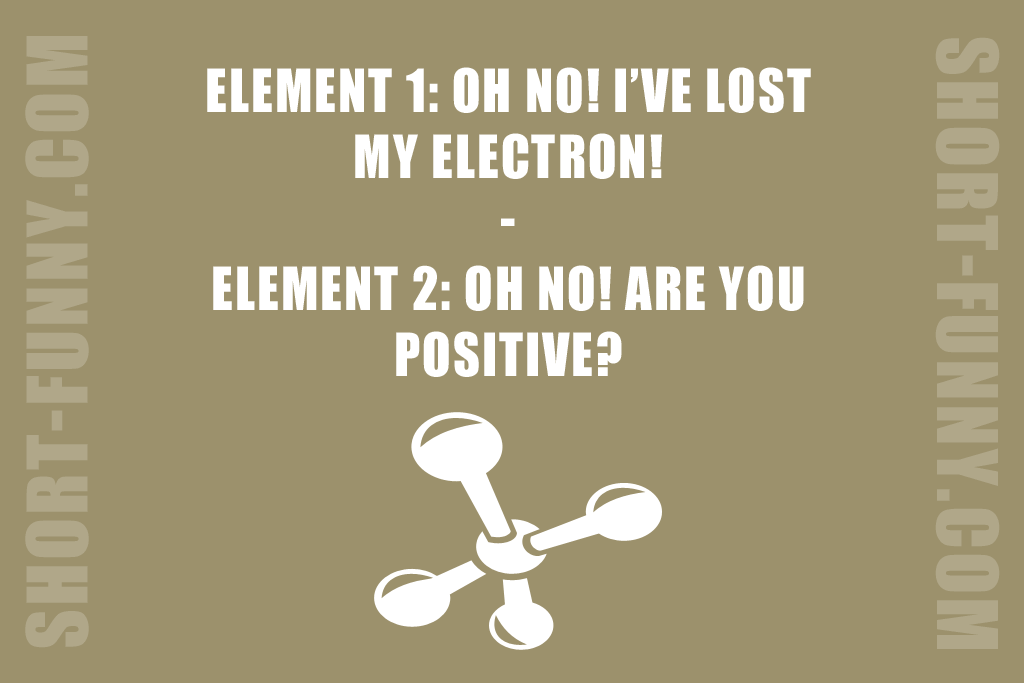 Element 1: Oh no! I’ve lost my electron!
-
Element 2: Oh no! Are you positive? Hey, did you just throw sodium chloride at my head?!

That’s a salt! Organic chemistry is a tough science.

You can run into alkynes of trouble. How can you tell that hydrogen’s been romping with oxygen?
-
There’s a puddle of water on the floor. Old chemists don’t die, they just become inorganic chemists. Helium walks into a bar fight. Argon hits him with a bar stool. Helium doesn’t react. The cool guys drop the base. The adventurous guys drop acid into water. Rule number one of chemistry: Never trust atoms. The little beasts make up everything! 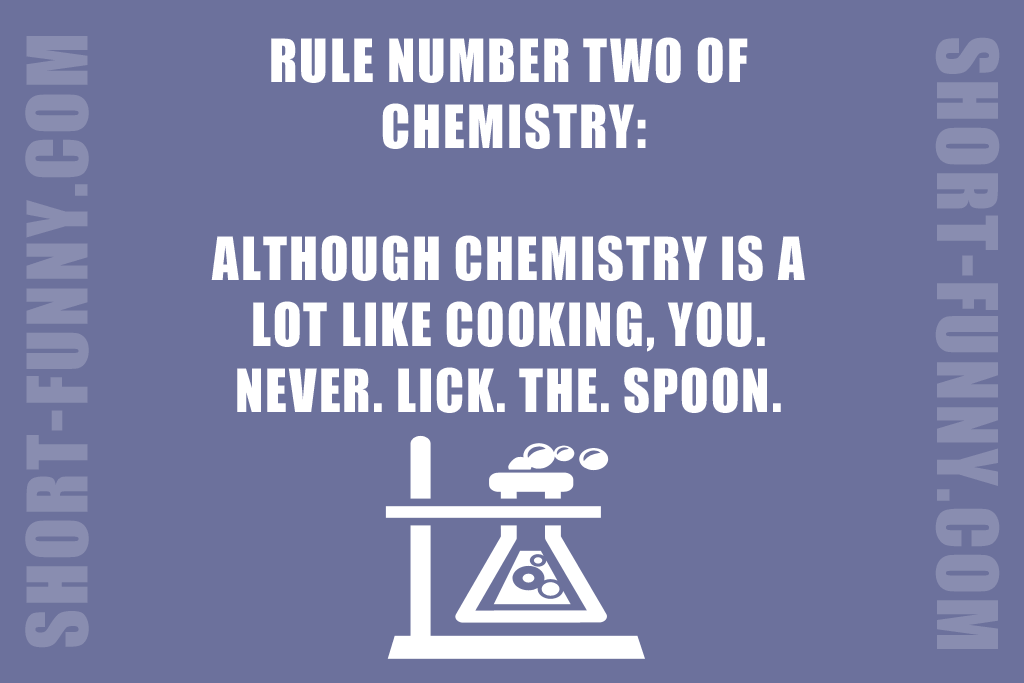 Rule number two of chemistry: Although chemistry is a lot like cooking, You. Never. Lick. The. Spoon. After a fight, proton sighs to his electron spouse: “I really don’t know why you always have to be so negative.” It is a little known fact that you can lower your body temperature down to -273 °C and be perfectly 0K. An American and a British chemist meet at a conference. “So what do you do?” asks the British chemist. “I work with arsoles,” replied the American. “Oh I feel you,” nods solemnly the British one, “my colleagues piss me off too.” So oxygen and potassium went on a date together. It was very much OK. A chemist came in a bar and ordered H2O. His chemist friend said he'd like H2O too. It was pretty messy. Then he died.

(For the non-chemist - H2O2 - hydrogen peroxide - is in its pure form not good for human health - not at all.) They’re adding a new element to the period table. It is Oh – the element of surprise. Eight sodium atoms entered the bar, one after the other. It was clear that Batman would soon follow. What is the difference between organic chemistry and zoology? Organic chemists study organic compounds. Zoologists study organic compounds that run around. Why did the Ministry of Defense order large amounts of acid? The army planned an operation to neutralize an enemy base. After I fell off the bike, my mom covered me with potassium permanganate.

I felt violated. Chemists make really bad DJs. They take extra care not to drop the base. The bartender says, “Get out of here. We do not want your kind!”
A quicker-than-light neutrino walks into a bar. Why are so many chemists addicted to alcohol? Because they are sure alcohol is a solution. Which element is the coldest?
-
Brrryllium What mental disorder plagues the gas chromatograph? Separation anxiety. It got so bad, he just sits, stares and hums „breaking up is hard to do.“ A word of warning about a lethal substance that is still shockingly widely available – the dihydrogen monoxide. It has caused the death of countless people, it is highly addictive and every single attempt to withdraw from using it results inevitably in very grim death,  it forms a greater part of polluted rivers and oceans and there are no attempts made on part of the government to even regulate it, let alone ban it fully. Please write to your local MP on this subject and demand a solution!
Why did the chemist have a problem getting a boyfriend? She had no acetol. 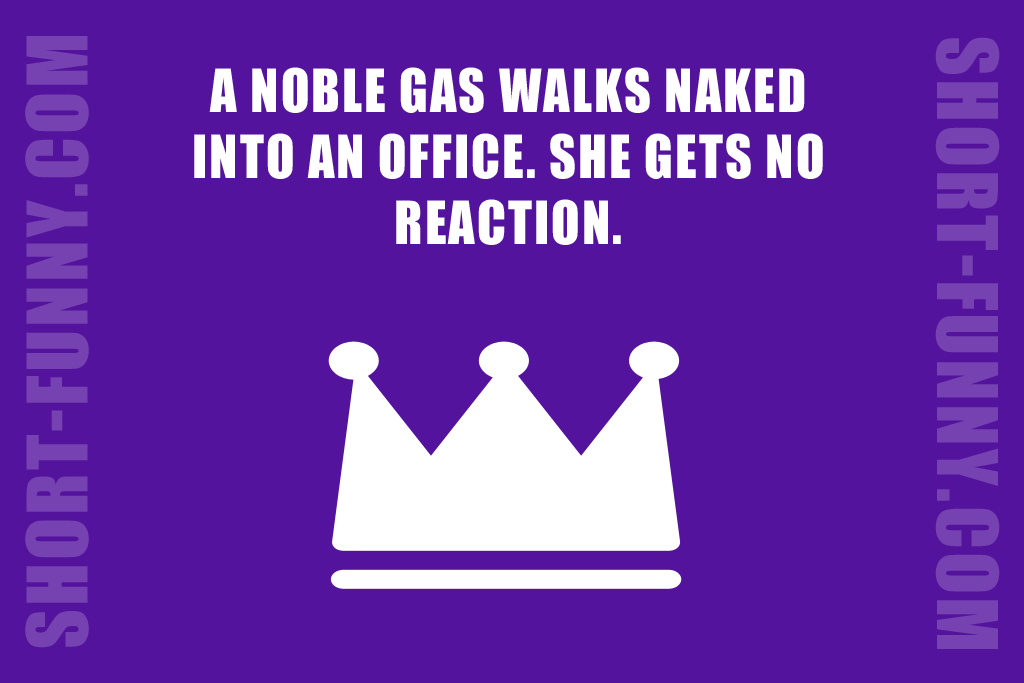 A noble gas walks naked into an office. She gets no reaction.
Is Schrödinger’s cat still alive? Well, to put it shortly, no. The longer answer would be yes.
Landlady: There was a chemist living here before you, Mr. Denny, a very nice man.
-

Potential tenant: Really? Well I guess those black, green and red stains all over the walls must be from the chemicals in his experiments, right?
-
Landlady: Partly. The red ones are Mr. Denny. What is a cation? A very positive kitten.
I blame the Avengers. My female colleague spent quite a while yesterday eyeing up the Thorium.
Are you part of the solution or part of the precipitate?
What did water say to sodium? I think you’re overreacting.
What’s so great about ammonia? Personally, I find it pretty base.
Because of its high reactivity, the slogan “If you can’t join ‘em, barium”  was suggested.
Have you got a problem? Call in a chemist. They can always come up with a good solution.
What is an acid with a serious attitude problem?
-
A-mean-oh-acid What is a chemist’s solution to times of hunger? Titrations.
A new element was found and added to the periodic table recently. It is called Unobtanium and is naturally found in small, flexible green and white rectangles called bills.
I went to the crappest party of my life yesterday. It was deathly dull and should have been called an Ode to Bohrium. 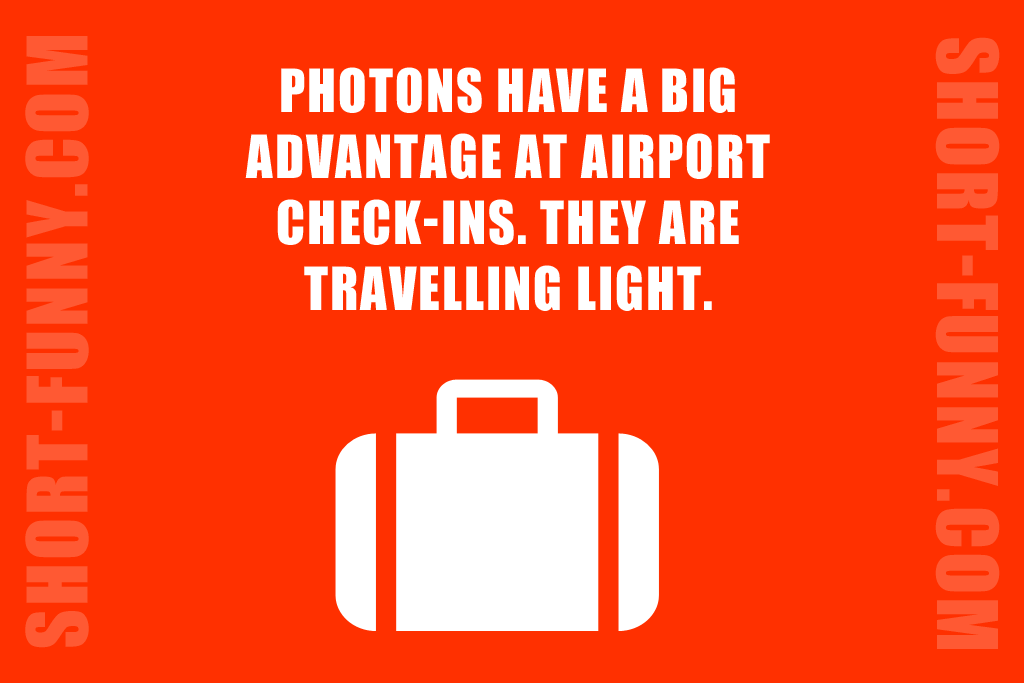 Photons have a big advantage at airport check-ins. They are travelling light.
Cole’s Law – mostly about cabbage, really.
Everybody knows H2O is the formula for water. But what about ice? H2O2! What is the difference between sea lion and a seal? An electron.
Telling chemistry jokes is only for the brave. Often, you get no reaction. So when a king farts, does that make it a noble gas?
What is H2O4? It’s for drinking, washing, gargling… you name it.
Sometimes, Cesium and Iodine get together and watch telly. CSI is their preference.
What to do with a chemist who’s gotten sick? If you can’t curium and you can’t helium, find a good spot to barium.
Two atoms are walking along when one says, “Hey, somebody just stole my electron!”

“Are you sure?” asks the other electron.

“Yeah, I’m positive!” My experiment blew up, annihilating the entire lab. But that’s life, oxidants happen.
Why is it not a good idea to get romantically involved with a hemiacetal? Because he is seriously unstable and always has some alcohol. 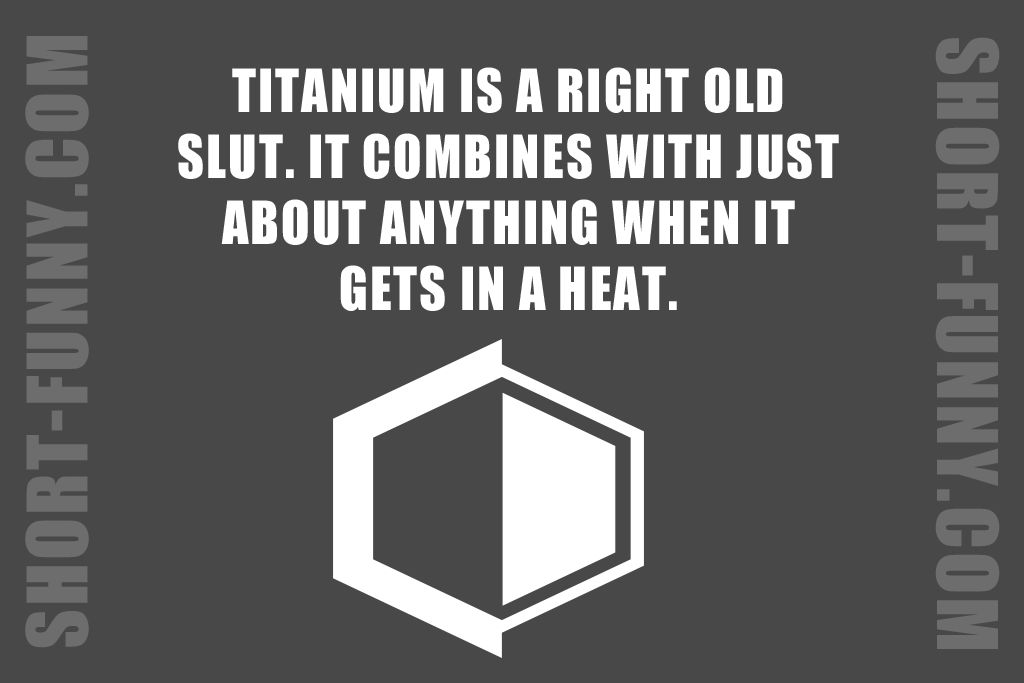 Titanium is a right old slut. It combines with just about anything when it gets in a heat.
What is so great about nitrates? You get double the pay of the dayrates. I got this fantastic book about helium. It is impossible to lay down.
All this arguing whether the glass is half full or half empty is futile. It is always full, only in varying ratios of liquid and gas.
What do you get when you replace the carbon atoms with iron in a benzene ring? A ferrous wheel!
Neutron goes into a house of ill repute and enjoys the company of a particularly seductive girl. When he’s leaving and asks how much he should pay, she smiles at him, batting her eyelids and breathes, “For you, there’s no charge.”
What is Beethoven’s favourite element? Sodium! Na na na naaa! What is hydrophobic? A person suffering from an irrational fear of utility bills. 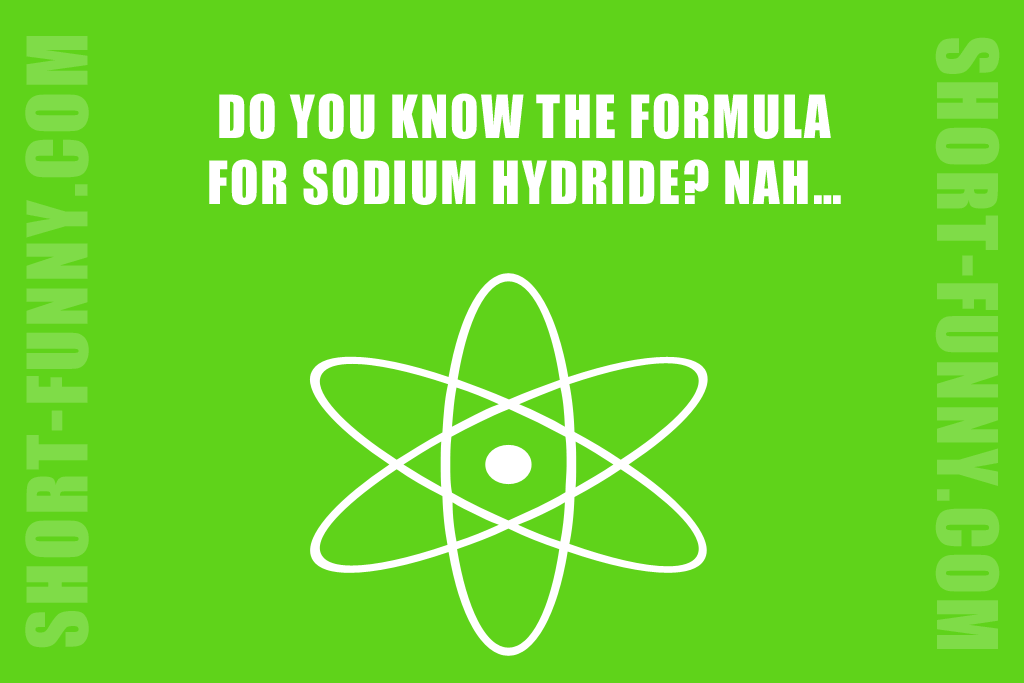 Do you know the formula for sodium hydride? NaH…
What is CH2O? Seawater of course!
What does Santa say when you leave him traditional Christmas sherry? HOH-HOH-HOH thank you so much!!! How come Iron Man is a woman? Because Fe-Male.
What is a girl’s best friend in potentia? Carbon.
What was a cation doing up a tree? It had been driven up there by a dogion.

It’s never a good idea to ask a chemist to make you a Pb and J sandwich…
Hydrogen accosts oxygen: “Hey you, you stole my electron!” 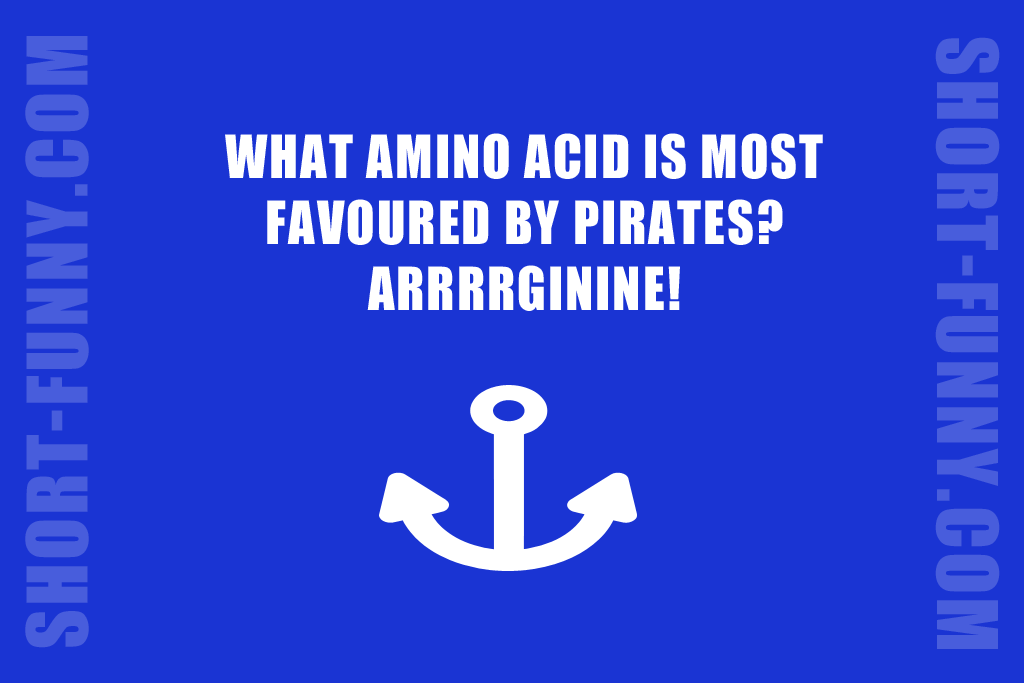 What amino acid is most favoured by pirates? Arrrrginine!
What compound a pessimist cannot live without? Nitrous oxide!
Do you know a good joke about sodium? Na…
A nerdy chemist walks out of an examination and smugly announces to all her friends: “It couldn’t have been more basic if it had pH -15!”
I keep hearing that alcohol and driving should never go together, so what’s with the cars that run on ethanol?
Yo mama is so ugly, even fluorine won’t bind to her!I I told my girlfriend a really good joke about cobalt, radon and yttrium. She said it was CoRnY.
If you wished to be discreet and inoffensive to the ladies of polite society, how would you write diarrhea? (CO(NH2)2)2Water said to oleic acid that they cannot be together. Oleic acid still thinks it is because she’s fat.