by Katerina Janik
What do you call an angry German mob?
-
A sour crowd.

- How often do I have to tell you not to dig around in the garden! That moment when you notice that one fork isn’t really very clean when you’re laying the table and you have to decide which family member you like the least. Woman at a maternity hospital is in a lot of pain, moaning. The man strokes her back, “I’m so sorry sweetheart that you have to endure this…”
-
She replies: “Don’t worry Steve, it’s not your fault.” My wife and I watched The Perfect Murder together. Awesome movie, what disturbed me a little though was my wife constantly taking notes. Bertie comes sadly to his mommy and says, “Mom, the kids have been mean to me. They keep teasing me that my feet are too big. Please tell me honestly. Are my feet to big?”

“Of course not, Bertie. Now go put your shoes in the garage, the dinner is ready.“ Girlfriend and boyfriend are strolling through the city or Paris. Suddenly he sees a shooting star.
-
Boyfriend: “Look, a shooting star! Make a wish!”
-
Girlfriend: “I want to marry you!”
-
Boyfriend: “Huh, maybe it was just lightning.” Doctor: "Mrs. Apfelbaum, your husband is very sick."
-
Wife: "Oh no. What is it?"
-
Doctor: "He is sick of your shit!"
-
Doctor winks ;) at the husband and gives him a high five. What are you looking at when you see two homeless dudes hitting each other with bits of cardboard?
-
A pillow fight. Famous last words of a bomb disposal expert?

"Yes, the red wire." If Hitler would have been a feminist what political system would he have come up with?

A dickhatership! What did the cannibal do once he dumped his lady friend?

He wiped his bottom. Doctor: “You look much worse than you did last week! I said you should smoke a maximum of five cigarettes a day!”

Patient: “And that’s what I did. And it wasn’t easy because up until now I didn’t smoke at all!” Imagine the Earth would spin 10 times faster – you’d get your salary every day and the women would bleed to death. When a blind woman tells her boyfriend that she is seeing someone, it could either be a really terrible news or a really great news. If you see me smiling, I'm probably thinking of doing something evil. 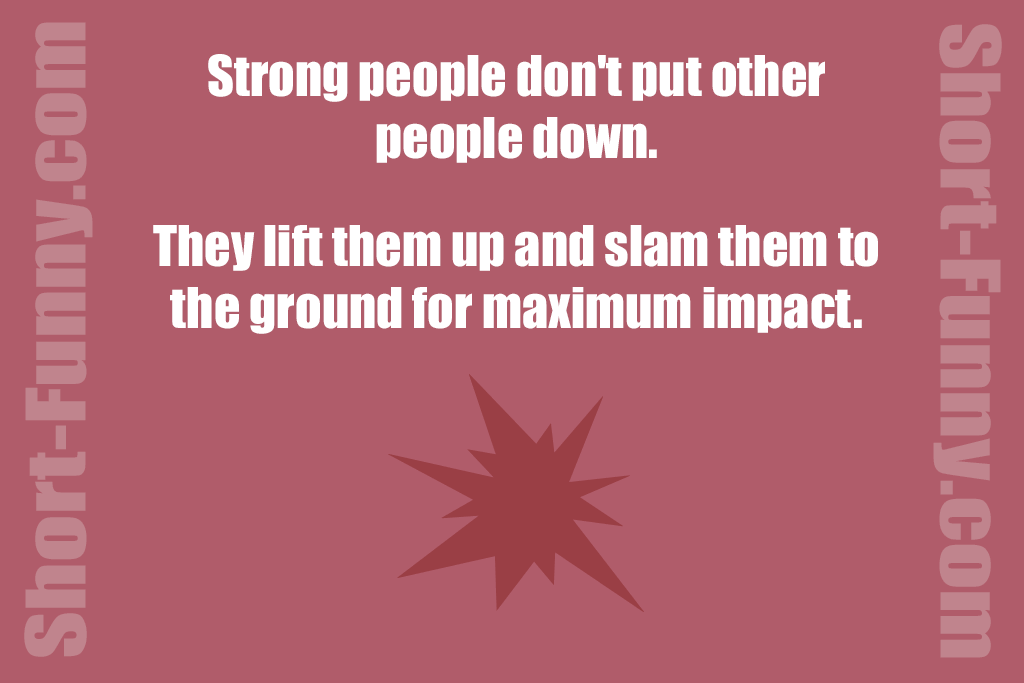 Doctor, please, my son ate some cement. What can I do?

First of all, don't give him anything to drink. Join the Army, meet some fascinating people, then kill them. Next Part
Best Black Humor Jokes