by Katerina Janik
A guy asks his waiter at a restaurant how they prepare their chicken.

The waiter goes blank for a second, then says, “Nothing special really... We just tell them they're going to die...”


They say the surest way to a man’s heart is through the stomach. But personally, I find going through the ribcage a lot easier. 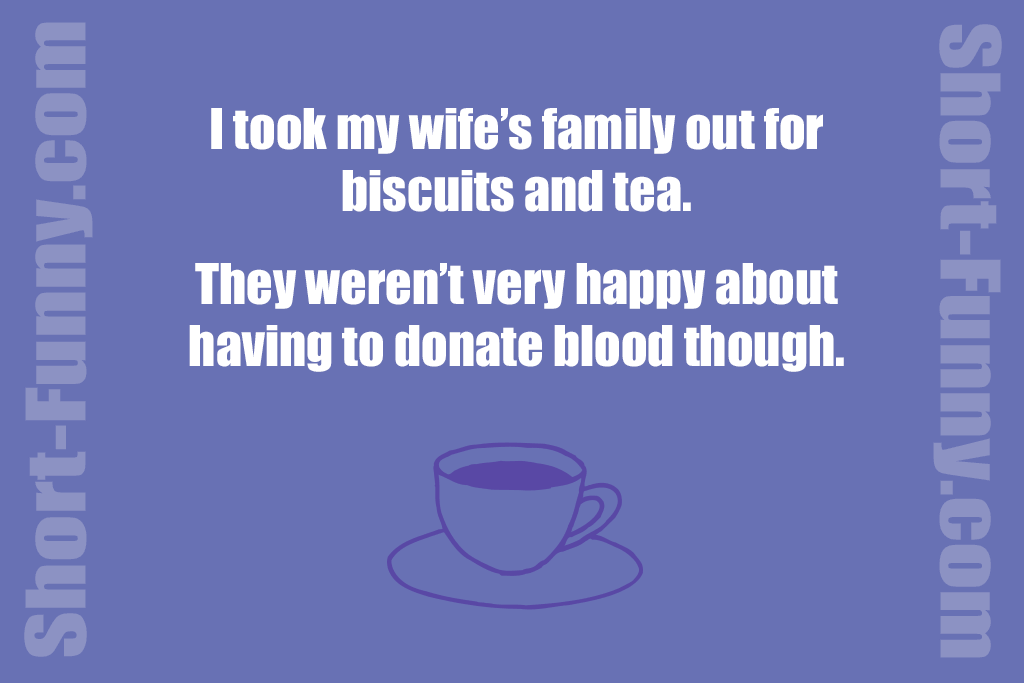 That awkward moment when you thought the guy was a pretty good magician, and only then realize he simply suffers from leprosy. Two hunters are chatting. One says, “I once shot a wild boar so huge, they had to tow it away with a tractor.”

The other says, “Ha, that’s nothing. I once shot a bird so huge, they found 75 people inside it!” What does a cannibal do after eating a vegetable?
-
Goes on eBay to see how much the wheelchair could sell for.Why did Lisa fall of the swing?

Because she had no arms.

Well, not Lisa, that’s for sure. Cremation. My final hope for a smokin’ hot body! “I’m on a hunt for my wife’s murderer, have been for years.”

“Oh my God! Your wife’s been murdered?!”

“No no, you misunderstand. I’m still looking for him.”My Grandfather has the heart of a lion and a lifetime ban from the Atlanta Zoo.


Son, "Mommy, mommy, daddy hanged himself in the attic!"

Son, "Gotcha, April's fool! He hangs in the garage."
I was digging in our garden and found a chest full of gold coins. I wanted to run straight home to tell my wife about it. Then I remembered why I’m digging in our garden. What did the man with no hands get for Christmas?
-
No idea. He hasn’t opened his present yet.I want a divorce!
-
But you made a vow in the church that we remain together till death do us part.
-
I guess you are right. Very well, go ahead and drink up the tea I made for you. Next Part
Best Black Humor Jokes