by Katerina Janik
"Madam, your son just called me ugly!"

The mother apologizes shamefacedly, "I'm so sorry, I must have told him like a thousand times it is wrong to judge people just from how they look..."

One man's trash is another Man's treasure? Wonderful saying, horrible way to find out that you were adopted. Today I found my first grey pubic hair. I got really excited, but not as much as the other people in the lift. A woman goes in the hospital for a very serious operation. Naturally, she’s nervous about the whole thing and talks to the surgeon the night before, “Oh doctor. I’m just so worried about this operation! Is it really safe?”

The doctor pats her on the shoulder, “There’s no need for panic, Mrs. Gimlick. I have personally performed this operation at least 30 times. It’s got to work out one day!” Why do you see so few black people on ocean cruises?
-
Well, they're not going to fall for that one again. I had a few drinks after work, so I decided to take the bus home rather than my car, you know, like they say on the billboards. I don’t know what idiot thought of that. I bet that even sober, a bus is a beast to drive!“ I finally got one of those roof boxes for the car. It's very practical. I can barely hear my kids now. A box of condoms, please.

Nah I’m OK. She’s actually quite pretty. What do you get when you cross a bunny and a Rottweiler?
-
Just the Rottweiler. Where exactly are you taking me, doctor?"

"And we’re not there yet." I got a job as a librarian, but it only lasted half an hour.
Turns out, books about women's rights shouldn’t go in the Sci-Fi / Fantasy section. Father looks at his teenage son, “James, you’ve been adopted.”

James jumps up, “Adopted! I knew it! I want to meet my biological parents!”

Father laughs, “No no, James, we are your biological parents. But you need to get packing, your adoptive ones will be here in an hour.” I took my grandma to a fish spa center where the little fish eat your dead skin for only $45.

It was way cheaper than having her buried in the cemetery. 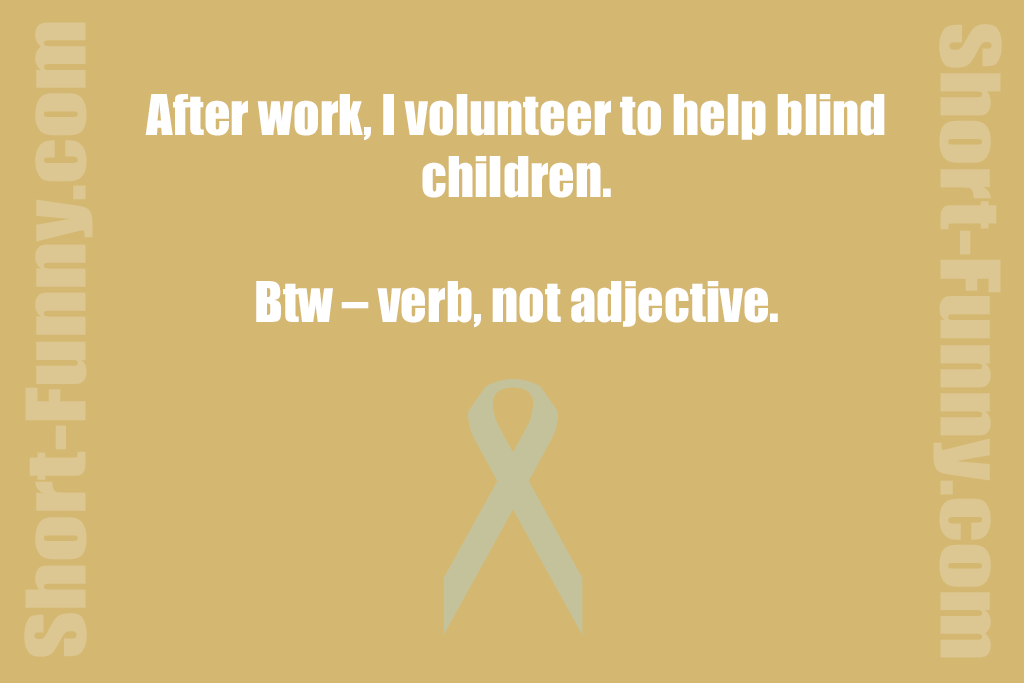 It is interesting how different nations have their dogs make different sounds.

An American dog goes Woof, a Czech dog goes Haf, a Dutch dog goes Blaf and a Chinese dog goes Sizzle.   What do you call a dog with no legs?
-
Doesn’t really matter what you call him, he won’t come anyway. Is there a better way to start your day than waking up in a loving embrace of another human being?

Unless you’re in prison, of course. What is the worst combination of illnesses?
-
Alzheimer’s and diarrhea. You’re running, but can’t remember where. Never shock lepers.

Their jaws might drop. Why are orphans unable to play baseball?
-
They’ve never known what home is.  Next Part
Best Black Humor Jokes