by Katerina Janik
8 p.m. I get an SMS from my girlfriend: Me or football?!


A man has usually no idea how often he normally farts. That is, until he spends 24 hours with a girl he likes. 9 out of 10 voices in my head are telling me that I am too fat. The last one is calmly preparing a bowl of chips. Why did Jeremy gobble up his homework?
-
He was told it was a piece of cake. A fat guy and a thin guy meet:

Thin guy: “And when I see you, I’d think you’re the one responsible for that!”  Did you hear about that kidnapping at school?!
-
I mean, that brat even started to snore! OK, enough! I’ll not be drinking any more!!
-
Not any less though, either. Waiter, I’ve seen your thumb dipping right into my soup as you were carrying it over!
–
Thank you for your kind concern, sir, but it’s OK, the soup is only lukewarm. Why hasn’t there ever been a vegan to the Moon?
-
Because there’s nobody there to whom they could tell they’re vegan. 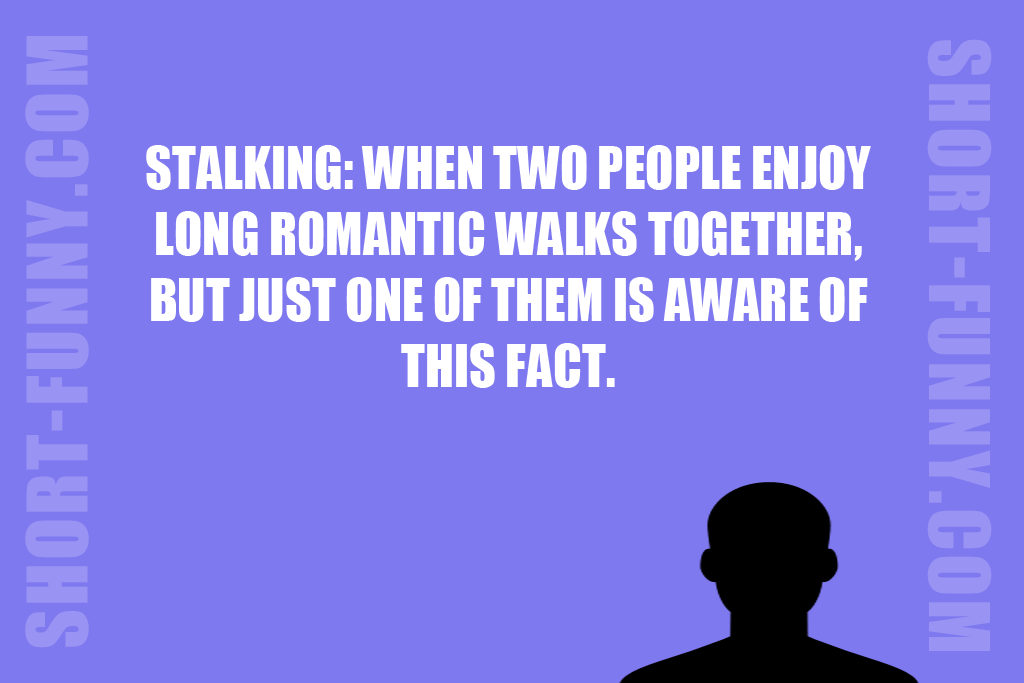 “Waiter, could you bring me some tooth picks, please?”

“I’m sorry sir but you’ll have to wait a little bit, they are currently all in use.”At a job interview:

“Mrs. Lober, what do you consider your greatest weakness?”

“Really? I don’t believe that is a weakness at all.”

“And I don’t give a rat’s fart about your stupid opinion!”


Why haven’t there been any shark attacks on lawyers? Sharks observe professional courtesy. A guy stands up at the close of a company meeting, “Guys, I just wanted to ask for your help, I lost a wallet with 450 dollars in it, if you happen to find it, please let me know, there’ll be a 50 dollars finder’s fee!”
-
Somebody in the back says, “I offer 100!” Seriously, some limits, please! I’m getting a bit tired of the constant police advertisements that they’re constantly sticking under my screen wiper. A child’s observation: If a mother laughs at dad’s jokes, we have guests. Earth says to Venus: “You need to get some life!“ My boss told me yesterday, “Don’t dress for the job you have, dress for the job you want”. But when I turned up at the office today in Ghostbusters gear, the bastard said I was fired. Let’s all stop and give some thanks to our feet and legs for always supporting us.  An egg and a chicken sit in a doctor’s waiting room. A nurse walks out of the office and asks, “Alright, which one of you came first?”
-
“Seriously!” shouts the chicken,” Here, too?!” I got a really cute dog and called him Threemiles. It sounds great to say I walk Threemiles twice a day. Two planets meet. One moans to the other: “Can you believe it, I’ve got humans!”

The other cheers her up: “Don’t worry, it will pass soon.” Jenny, if you think your husband’s handsome, you should see my boyfriend.

Nope, an optician though. Next Part
of the Hilarious Jokes