by Katerina Janik
In any argument, a wife has the last word. Anything the husband says after that last word is the beginning of a new argument.


I’ve just had a really big row with my wife about going on holiday. I wanted to go to Paris; she wanted to come with me. Women. A weak and helpless being from whom nothing can protect you. Long-term marriage? That means that when your wife asks you to strip, it’s more likely that she’s trying to fill up the space in the washing machine than anything else. Me as best man:

I heard the best man’s speech should last as long as the groom lasts in bed. Thank you very much for your attention. Enjoy the wedding. I called Debbie to celebrate our first anniversary. And she just hung up. Doesn’t our separation mean anything to her? Women can be likened to roads. The more curves, the bigger the danger. Policeman: I'm very sorry, sir, but it looks like your wife got hit by a bus.

Man: I’m aware of that, but Karen has a wonderful personality. Knock Knock
-
Who's there?
-
The love of your life!
-
Liar, you know chocolate can't speak. 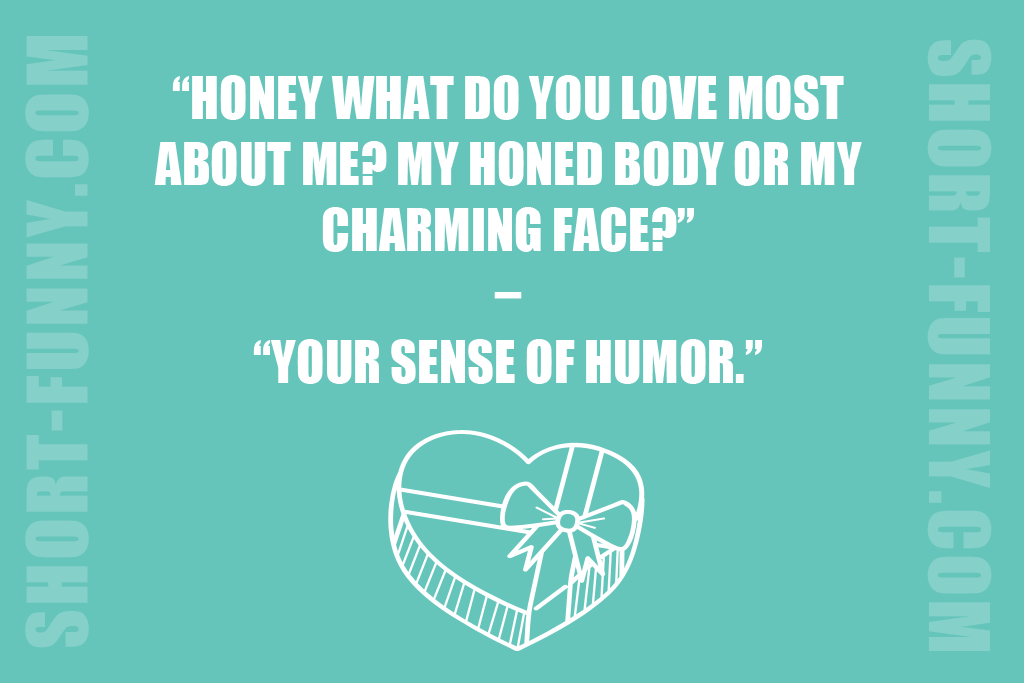 Man to his wife, “Do you like it at the beach, darling?”

“Yes! The view makes me quite speechless, dear!”

“Very good, we’re staying 3 weeks.” Girl: One day I will marry. A lot of men will be sad that day.
-
Boy: Wow, how many men do you plan to marry? Telegram to husband: Wife dead. Bury or cremate?

Man: Take no chances. Burn, then bury ashes.  A man noticed his credit card has been stolen - but he never reported it because the thief was still spending considerably less than his wife. Finally I got an idea of what it looks like in a woman’s brain: 126 open tabs in an internet browser. How do you know a woman doesn’t value honesty? When she asks you, “How do I look, darling? ”Man: Darling, I just ordered our groceries online.

Wife: Really?! You’ve just sent me a Whatsapp saying I should do the shopping.

But a few Middle Eastern weapons manufacturers offered a very nice price for her recipes.  I felt incomplete until I married you.

Now I’m finished. Husband: Shall we make a nice weekend for each other, honey?”

Wife: “Oh, that would be lovely, Georgie!”

Husband: “Fantastic! Well, see you Monday.” A real man always accompanies his wife to the train station when she leaves. What other way to make sure she’s actually gone?  Why do men so often die before their wives do?
-
Because they want to. Woman says to her fiancé: “When we’re married, we’ll have three kids. A brown-haired girl and two blonde boys.
-
Fiancé: “How can you tell with such precision?”
-
Woman: „Because I told my parents I’ll finally pick up the kids from them once we’re married.“
Husband takes his wife to a disco. There’s a guy on the dance floor dancing like a king –moonwalking, break dancing, head spins, the works.

The wife turns to her husband and sighs: "You see that man? 25 years ago he asked me to marry him and I said no."