by Katerina Janik
Q: Why did God create Adam first and Eve as second?

A: Because he wasn’t interested in listening to anyone telling him how to make Adam.


A boy asked his father, "Dad, how much does it cost to get married?"

Father grimly replied, "I wouldn’t know son, I'm still not done paying for it." When a woman asks if you think she’s fat, just say, “Hang on, I’ll just walk over to your front side.” Oh, I didn’t expect you at work today Mr. Brundy, isn’t it your
mother-in-law’s funeral today?”

“Well you know how it is. Work first, then fun.” 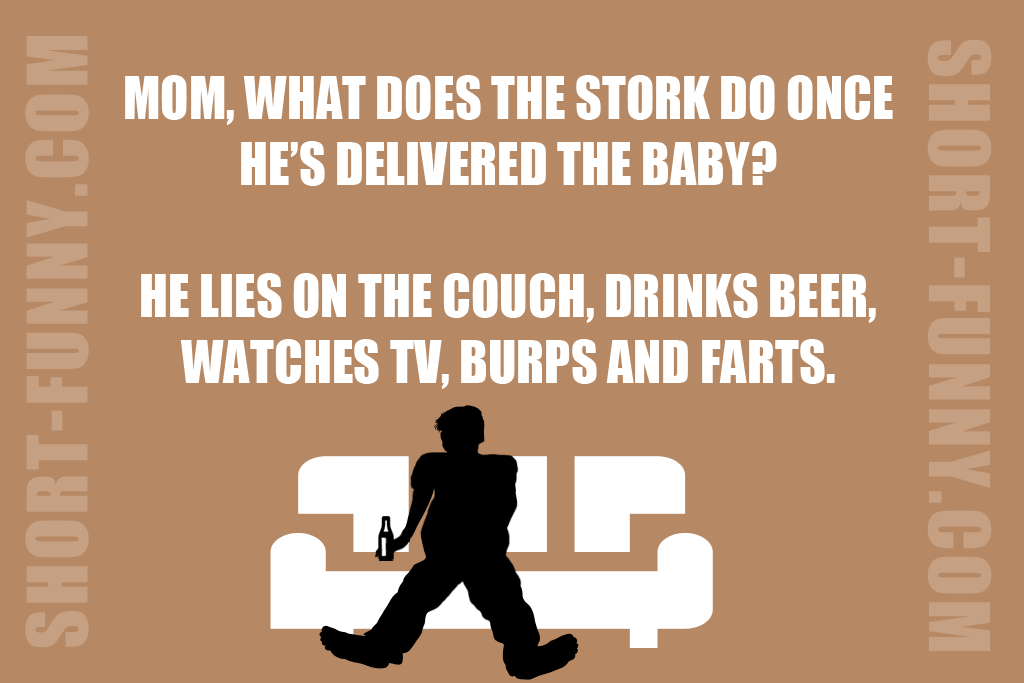 85% of married life consists of yelling "what?" from the other side of the house. “What the hell, are you insane?!”

„What? Why? I thought we agreed we’re going to throw our sorrows overboard on this Caribbean cruise!”

Ladies and gentlemen - I present to you my wife! A wife hangs up after about a half-hour on the phone.

The husband is surprised, "Wow, that was quick - usually you women are at it for two hours at least!"

"Yeah, well, it was a wrong number." A man simply doesn’t have a clue what real happiness is until he gets married.

But then it’s already too late for him. My wife told me to go and get something that would make her look sexy. So I got drunk. My girlfriend said she expected me to treat her like a princess.

Very well, I married her to a weird guy old enough to be her grandpa to strengthen my business alliance with Germany. Question: How to prevent my wife from shopping too much?
-
Answer: Hold your wife’s hand in the shopping mall. For her it's romantic; for you it's economical. My wife came to me all happy, saying, “Look darling, you got me this 40 years ago on our honeymoon, and it still fits!”

I love her so I let it pass. It was a scarf. A man and a woman are having a date.

The woman remarks, “You know, you look totally like my third husband!”

The man is startled and asks, “Really, Laura, how many times have you been married?!”

“Twice.” A woman says, I don’t know what he’s complaining about. I made him a millionaire!

And what was he before?

A billionaire. My wife whispered in my ear today that she’s not wearing any underwear. Oh boy, now she’s already growing forgetful. “Oh no, Roger, why did you two split up?”

“She’s a liar and a cheat! She said she was the whole night at her sister’s!”

“Yeah, no way. I was the whole night at her sister’s!”
My wife wants to talk to me about my childish behavior.
-
Well, she may want all she likes, but she’s not getting inside my pillow castle without a password! A man sits in a restaurant and cries. The waiter comes and asks what happened.

The man replies: “My wife told me that she wouldn’t talk to me for a month.”

Man: “Yes!!! (Sobs) Today that month is over.” My wife told me I was one in a million. When I looked through her text messages, I had to admit she was right. Sugar, can you lend me 15 dollars? I want to buy a case of beer.

No darling. I wanted to buy myself some make-up because I want to look pretty for you.

Sugar, that’s exactly why I wanted to buy those beers. Arguing with your husband is fun, even if he wins... he loses. I went through an expensive and painful procedure yesterday, having had my spine and both testicles removed. Still, some of the wedding presents were fantastic. Women are saints. They forgive you even when you’re not guilty! Why do they call it the “mother tongue”? Because the man never gets to put a word in. A scientific study discovered that women with extra weight usually live longer than men who point it out. An elderly couple:

Jim: “The evil never sleeps.” Men who ignore their wives’ raised eyebrows are losing valuable time in which to escape. One easy step to lose an argument with a wife: 1) Argue. Next Part
Husband and Wife Jokes