Father: “All I hear is want, want, want. I need to hear some more about giving, too!” 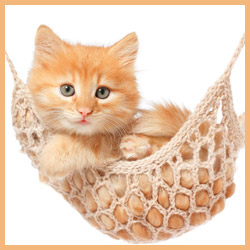 Lift your mood with the cutest and sweetest jokes we could find.

A female kangaroo scratches her stomach for a while like mad and finally yells, “How often do I have to repeat myself, no cookies in bed!!!”


Mummy, where were you when I was born?

That’s great. So nobody was home when I arrived. Little Ernie asks his auntie, “Why do you have such a big tummy, aunt Lisa?”

“Because there’s a baby inside.”

“Well I still think it isn’t right to eat them.“ Little Johnny walks into a pet store and asks the shop assistant: “Could you do me a big favor and throw me a fish please?”

“Why on Earth would you want me to throw you a fish?!”

“Because I want to tell everybody at home that I caught a fish. Three bunnies want to jump a wall. First one jumps and clears the wall with a good 4 inch reserve.

The second bunny jumps and makes it over the wall with a 5 inch reserve.

The third bunny jumps and slams headfirst into the wall. When he wakes up, he says, “I must have jumped the highest. I definitely saw some stars.” Two vampires are catching up and one says, “Yeah, I’ve recently become vegan.”

“Seriously?” says the other, “and what do you eat then?”


I bet you 125851265228542 dollars that you didn’t bother to read that number. You just cruised right over it, didn’t you? You didn’t even notice I put a letter in it. Well I didn’t – but you went and looked anyway. My, you are quite predictable! A boy comes into a butchery and stares at the butcher for at least 5 minutes. Finally the butcher asks, “So why do you stare at me for such a long time, boy?” The boy explains: “My mother wanted to know if you have a pig’s tail or pig’s ears.” “Your brother is so small!” the neighbor says happily to little Paulie.

“Yeah, he’s only my half-brother.” “Have you ever seen a little calf being born?” asks a farmer Little Johnny.

“Well, first come the front legs, then the head, then the shoulders and the body and finally the hind legs.”

“Wow, cool, and how do you put it all together then?” The magical goldfish agreed to grant three men a wish each.

The first man wished for a room full of gold.

The second man wished for a room full of diamonds.

The third man wished for keys to those rooms. Two pigeons are sitting on a roof, watching a fighter plane streak across the sky leaving a big condensation trail behind it.

“Wow, he seems to be in a hurry,” observes one pigeon.

“And what would you if your butt was on fire?!” A gardener picks up horse droppings off the road. This interests a passerby: “What do you do with the droppings?”

Gardener: “I sprinkle it on my strawberries.”

Passerby: “Funny, we usually use sugar…” A farmer needs to know how many sheep he has in his field. He calls his German Shepherd dog to count them for him. The dog runs off, counts the sheep and returns to the farmer.

Mother: “OK, start with the good one.”

Child: “I scored an A in the math test.”

Child: “That this was only a joke.” Lilly bursts into the house from the garden and tells her mom out of breath: “Mom, mom, I accidentally knocked over the big ladder that was leaning against the house!”

Mother says, “Well go get daddy, he’ll help you put it back.”

Lilly hops on the spot, “But I can’t, he’s still hanging onto the eaves trough!” A school proudly installs a long row of coat pegs on the wall, with a sign on the last five: ONLY FOR TEACHERS.

The next day somebody adds: BUT CAN ALSO BE USED FOR COATS. Why do teachers hate playing hide and seek? Because nobody is ever looking for them. 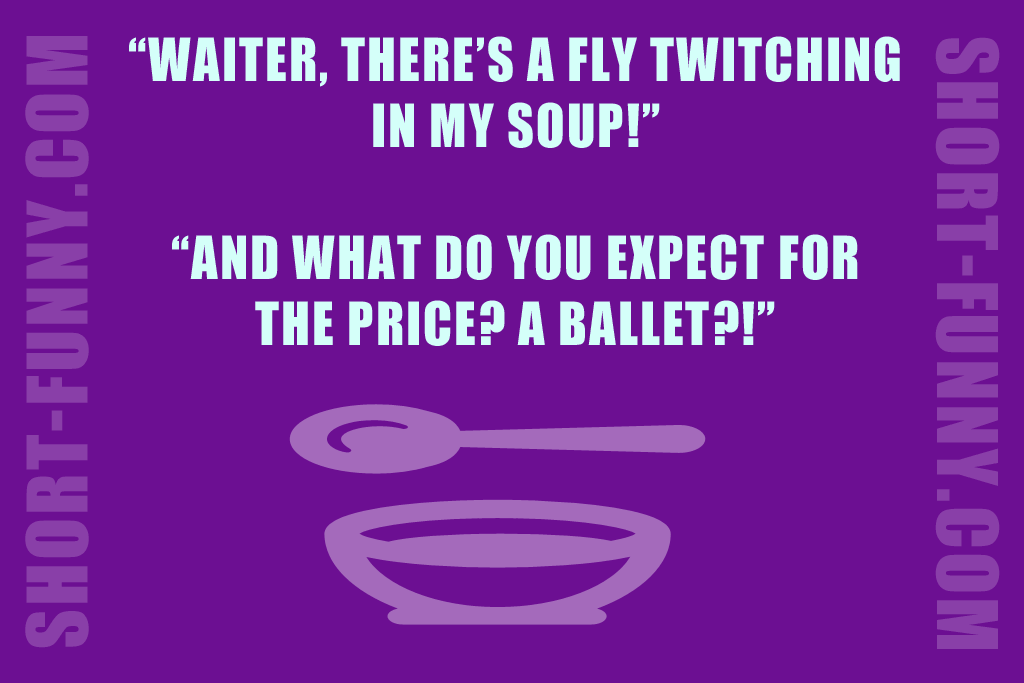 “Waiter, there’s a fly twitching in my soup!”

“And what do you expect for the price? A ballet?!” What is red and flies through the air?

A tomato in a helicopter. Miles sits down in a mountain restaurant’s garden and orders a Coke. But when the waiter comes, he brings him 3 Cokes. “But I’ve just ordered one?” says Miles to the waiter.
“I’m very sorry, we get that problem all the time, sir. It’s the darned echo here.” Why is it that bicycles fall over so often?
-
They are two-tired. Q: What is worse than having a roaring T-Rex following you?

A: Having two roaring T-Rexes following you. Why did Harry the dumb policeman always carry a pair of scissors?

To be able to cut off a suspect’s escape route. A little boy stands in front of a house and cries. A guy sees him and asks, “Why all the crying, little guy?”

“I can’t reach the doorbell.”

The man rings the bell for him and smiles at the boy. The boy smiles back at him and says, “Great, and now we just have to run away very quickly!” Freddie says to his dad: “When I’m a grown-up, I’m going to marry Grandma!”

Father smiles, “Come on, you can’t marry my mom.”

“And why not? You married mine! “ Teacher tells Maia, “Name me three African animals.”