Jokes for people with constipation

Best first: I met a microbiologist the other day.
-
He was much bigger than I expected. 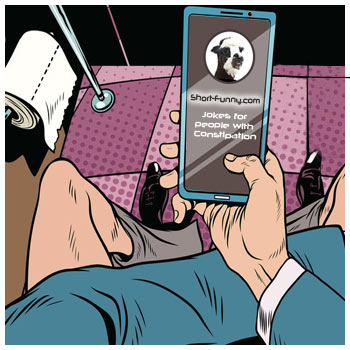 Read our free jokes and unleash the humor within.

Jokes that we couldn't hold in.

A couple sits on a sofa. He has foot odor and she has mouth odor. After a moment of awkward silence, she says, “Paul, I have to tell you something.” “No need,” Paul raises his hand, “it’s OK. I know you ate my socks.”

“OK, go!” If you’re ever lost in the nature, you’ll do well to have a compass.

It will help you to be lost more north. Q: What does a doctor do when he has no patients?

A: He’s killing time. Anita meets her friend Tanya after a long time and they chat a bit, when Anita asks, “And are you still engaged to Rowley?”

“No, not for a long time,” smiles Tanya.

“Oh thank goodness for that, what a jerk that guy was! I never got the courage to tell you, but I’m pretty certain he was cheating on you with Greta and Louise!”

“Um…” Tanya continues, “yeah… we got married three years ago.“ A ship has been badly damaged in a storm and things don’t look good.

The crew assembles on the deck and the captain shouts over the howling wind, “Men, it’s bad. The helm is broken off, we have three huge holes, I really don’t see this beauty making it to the shore. Is there anyone among you who knows how to pray?”

“Excellent, you do that,” shouts the captain. “Now the rest of you put on your life jackets, we were missing one.” My friend talked me into lending her money for plastic surgery. I’ve been trying to get it back for months. Unfortunately I have no idea what she looks like these days. Place a piece of sugar for an ant to find. Once it does, it will then go to the other ants to tell them about the sugar.

Before they come back, remove the sugar.

All the other ants will now think that the one ant lied and his reputation as food seeker will be ruined. Mrs. Blutwurst is to have quite a tricky operation and is very nervous about it. Just before she gets her anesthesia, she grabs the surgeon by the hand, “Oh doctor, I’m so afraid!”
“Don’t you worry, Mrs. Blutwurst,“ says the doctor, “I did this operation 30 times already. It has to work this time. An international football team flies on a charter jet to their next tournament. It’s quite a long flight and they get bored and decide, since it’s a charter flight, that they’re going to play some football on the plane.

After a while the captain is getting angry with all the yelling and bumping and sends his co-pilot to go out there and shut them up.

30 seconds later the co-pilot comes back and the plane is wonderfully silent.

“That’s awesome, how did you manage to calm them down this quickly?”

“It was no problem. I just said, ‘Listen, guys, the weather is lovely – why don’t you play outside for a while?’”


A wealthy couple is discussing family finances one evening.

The discussion goes on and the man gets a little angry: “Well, Marianne, if you would learn how to cook properly, like a normal wife, we would save a fortune on the cook!”

The wife shrugs and replies, “And if you would learn how to do it, like a proper husband, we would save a fortune on the gardener.”  Two sharks are swimming along in the ocean when they spot a windsurfer.

The second one nods appreciatively, “And on a nice little plate with a napkin, even!” “Hey, Karen, how much do you weigh?”

“Aw, come on, tell! Give me at least the last three digits!”

A guy comes in a bar and orders 3 whiskeys. “Why three?” wonders the bartender.

“I have 3 brothers in different parts of the world and we have this tradition that we go drinking once a month and when we’re not together, we go anyway and have a drink for the other two.”

He does this regularly for a few months, until one day he comes in and only orders 2 whiskeys.

“What’s up?” asks the barkeep, “did you fall out with one of your brothers?”

“Nah, it’s all fine, but I decided to stop drinking.” 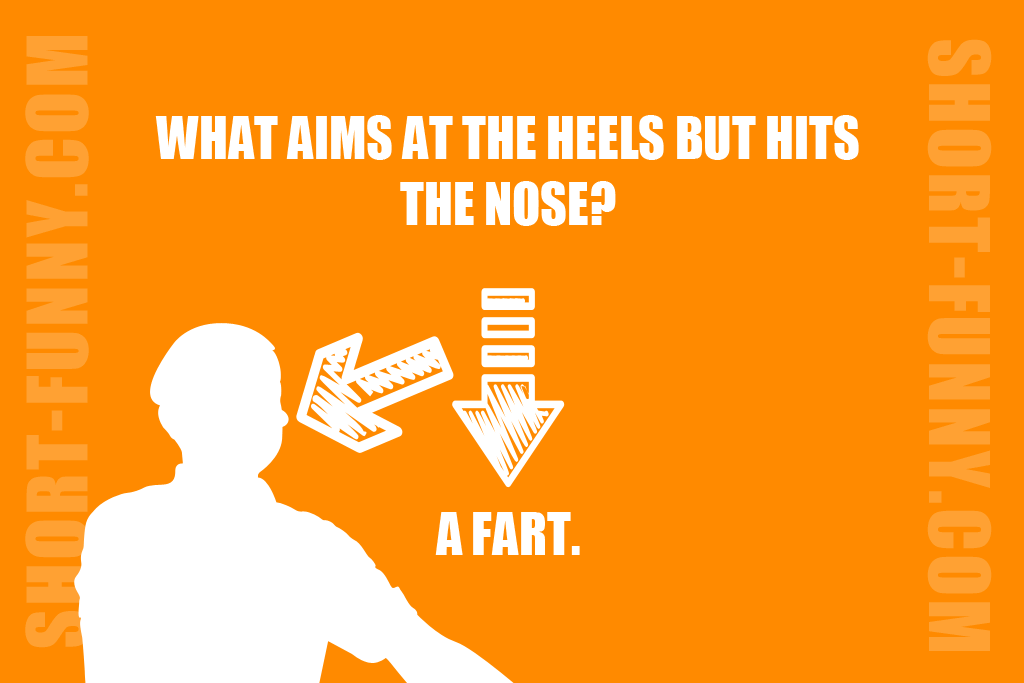 What aims at the heels but hits the nose?

A fart. Next Part
Jokes for people with constipation