May I be excused? My brain is quite full.


Experts say you shouldn’t eat at night. So who put the light bulb in the refrigerator? Funny bumper stickers:

Do we know each other? No? Then please keep your distance.
-
Sure, overtake me if you want. We'll meet again at the next traffic light.
-
Braking is for suckers.
-
Am I driving too close in front of you?
-
Escape vehicle. Please do not park too close.
-
I'm also lost. There's no need to follow me.
-
I never drive faster than my guardian angel can fly. Dear unknown person. Please stop feeding the voodoo doll of me. More sports? Me? Why!? My blood already runs 75 miles a day. There are things in the world I wouldn't mention even to myself. Don’t believe everything you think. I’m not lazy. I’m just naturally a very relaxed person.I’m aware that the voices in my head aren’t real. But their ideas are just awesome sometimes! I had loads to do today. Ah well, so now I have loads to do tomorrow. Of course I have a talent. I'm really good in bed. Sometimes I sleep more than 9 hours in one go.If I can still lie on the ground without having to hold myself, I'm not drunk.A sound defense:

Crazy? Me? Nah - It was the voices that told me to do it. I’m all for irony, but the phrase “Good morning” seems to be going a bit too far.He who wakes up early, yawns all day long.Dogs have beloved masters. Cats have waiting staff. Funny that you can't spell "slaughter" without "laughter". Don’t lose faith! Life is wonderful! I mean, not yours, but still!I speak fluent Ironic with a solid sarcastic accent. I used to think that you were a pain in the neck.

My opinion of you has dropped significantly lower since then. The perfect man doesn’t swear, doesn’t smoke, doesn’t get angry, doesn’t drink. He also doesn’t exist.Stop smoking for good.
-
Smoke for evil! Promises are like babies… They’re fun to make but hard to deliver. Just you keep on talking, for sure someday you’ll say something intelligent. Do not let your mind wander too much. It is too small for you to let it out alone. Everyone wants what’s best for you.

So don’t you let them take it!!! It is what’s inside that matters - the fridge is a perfect example. If you see nothing you could be grateful for, check your pulse.When somebody is totally angry, why not say:

"Yes, young Skywalker. Come over to the dark side of the Force."A lot of people are only alive today because the law makes it impossible to shoot them. I just broke my record at the gym. I sucked in my belly for a whole hour and a half.Oh no, did you fall down?
-
No, I hugged the floor!
-
Come on, why are you crying then?
-
It was an emotional moment. What – me?! A stalker?! Never! I just like to be well informed, that’s all. A keychain is a device which enables you to lose all keys at once. 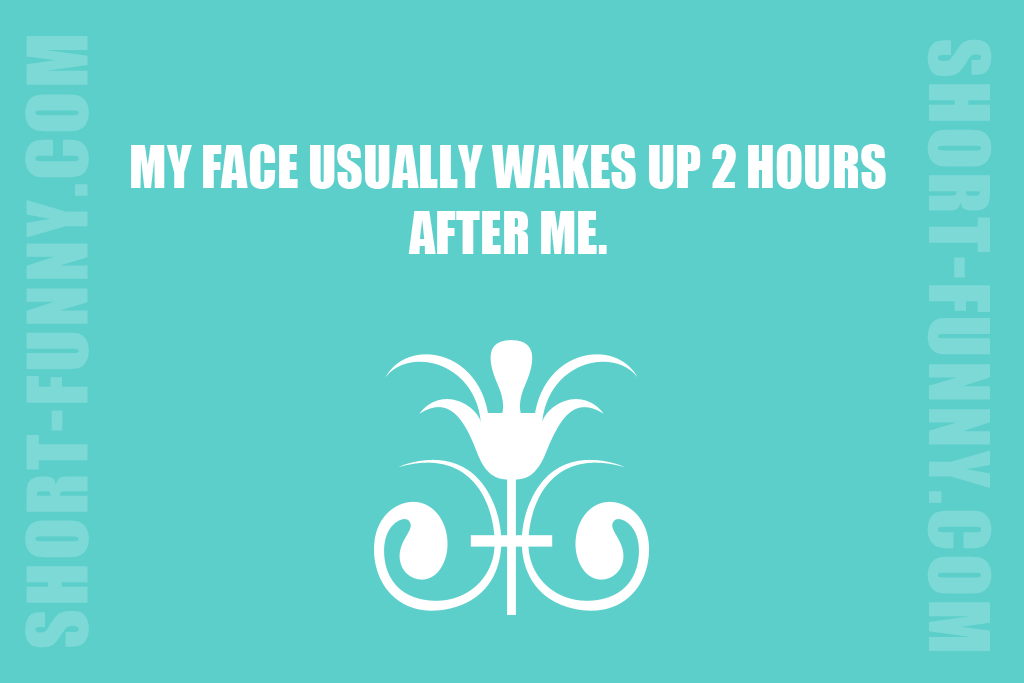 I decided to invest all my resources into alcohol. I mean, where else would I get 40%?! They forbid tweezers on airplanes. But frankly, if you manage to hijack an airplane with just a pair of tweezers, you probably deserve that airplane. I have a motivational problem. But only until I reach the point of having a deadline problem. I quite like the hurricane season. I can just put anything I don’t need anymore out on the balcony. There are days when you just want to envelope everybody with light and warmth… preferably through the use of a flamethrower. One way to get rid of the Jihadi problem, and fast, would be to persuade the Chinese black market that Jihadist testicles are a super powerful aphrodisiac. The worst thing about parallel parking are the eyewitnesses. Next time you get a call from an unknown caller, pick it up and say: "It's done, but there's tons of blood everywhere." and hang up. When you don't know the answer or perhaps you don't want to say:

I will now answer you with a direct and unequivocal "maybe". When I was a kid my parents used to forbid me to even go near the cupboard with all the cleaning bottles. I’m proud to say it works until today. If the guy on the ATM in front of me takes even longer, I’m going to ask him what level he’s on now. WARNING: Alcohol consumption may cause you to think that you are whispering when you are quite definitely not. When somebody has a belly ache or doesn't feel well, why not cheer them up with:

Ah, you've been nibbling from the loo again, haven't you.


I wouldn’t say my cooking is totally terrible, but native Indians keep showing up, asking if they can dip their arrow tips in my soups.   Did you see (or possibly get) a bad hairdo?

I wonder what the hairstylist does for a living... The internet never forgets.

The internet must be female. When a bird hits your window, how do you know God isn’t playing Angry Birds with you?
9 out of 10 voices in my head say that I'm crazy. The tenth is humming. When you're late:

I'm never late. The others are simply too early! First Part
Funny Sayings